If you want to practise phrasal verbs, here is a link where you can play or study them at home. Hope you enjoy them.

Here is a video containing some of the pictures taken on the trip to Scotland so that you can enjoy the wonderful time they all had in the 10 days away.

Email ThisBlogThis!Share to TwitterShare to FacebookShare to Pinterest
Etiquetas: videos

It´s time to learn about the weather!

Games to practise past simple. Not everything is boring grammar exercises.

In the UK there are many different accents, WATCH this video to know more.
Publicado por Joseph en 20:23 No comments:

Here you are some VIDEOGAMES to practise. 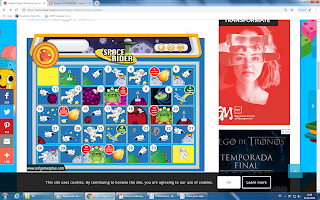 The British presence in our islands has always been important. That is why our school thought it would be a really interesting idea to plan an outing to Las Palmas de GC in order to learn more about the British influence on the island.  Below you can find two videos, one by Cliff Richard and the other one sponsored by Cabildo de Gran Canaria, which are both worth watching.